Fame is fleeting.  That old saying doesn’t seem to apply to the 1968 Mustang known as “Bullitt”.  As I sat with thousands of others at the Mecum Kissimmee auction just one week ago I looked around and wondered if it would ever lose its charm.

The pomp and circumstance surrounding the car was incredible.  Traveling from it’s display box to the floor of the auction, like a pilgrimage.  Lights dimmed, a green aura above the pathway and flanked by a small group of Mecum assistants with a thin yellow rope boxing in the Bullitt as it creeped past hundreds of fans ten deep.

Sitting center court about 25 rows up, my vantage point was perfect.  As you know I’ve seen the car close up so my goal was to drink in the experience.  I left the clamoring for a photo to the others.

As Sean pulled it front and center, the cheers faded and his voice came over the PA.  He thanked everyone who made the event possible, his family and especially his Dad.  As we all know it was a special car to the elder Kiernan.

Bidding started at $3500 for lot 150, the same amount paid for it twice before.  Everyone in the room raised their hand/paddle/spirit to bid. Hands dropped as the bidding quickly reached one million dollars.  There were a couple bidders in the room and some on the phone.

The Stetson laden auctioneer made his move to stand on top of the front table to get a better eye on bidders.  Everyone was standing and filming and wondering…would it go for the 3-4 million that was predicted?  It was hard to believe that the whole thing was happening.  All the hype that had come since Sean announced that he would be auctioning the Bullitt was now reality.  A few melancholy feelings set in for me.

Over the past fifty years or so we’ve run the gambit from knowing exactly where the car was (on a movie lot shooting the picture) to not.  Many were ecstatic when it was discovered and displayed again at the Detroit Auto Show in 2018.  Now we were going back into the dark ages as to where it ended up.  Only Frank (Frank Mecum) knows where it would rest as the gavel finally fell to the phone bidder for 3.4 million dollars.

When it was finished things seemed surreal.  There was the car, right in front of us, and as it pulled away many followed.  I was one of them.  As I made my way to the exit and watched Sean carefully maneuver past fans in tow, it was a moment in time anyone who attended in person will remember for posterity.

As quickly as the Bullitt came into our lives via the big screen, it exited just as quickly as we tried to keep up.  Feet vs. four wheels never wins and as Sean snaked out the back and around the lot we trotted for one last glimpse of the icon.  Sad that it was over, but some excitement as to what will be next for that car.

Thanks to Mecum and Sean, the send off was historical.

To the new owner, just let us know where it landed…hope its not another fifty years until we see it again.

As for that 10 minutes of fame…cut it to five and you’ve got lot 149 that will forever be known as the car that sold right before the Bullitt.  1970 Dodge R/T Challenger 440 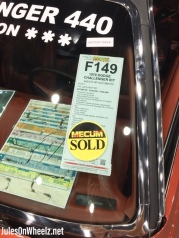