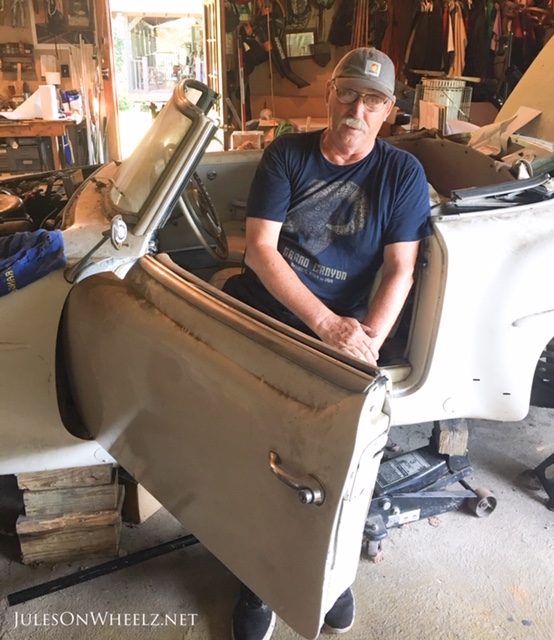 Often requested, sometimes given, never taken for granted…second chances.  We’ve all had those times in our life when we wished for one, decided to grant one or were the benefactor of one.  Mistakes are made, decisions regretted and if you’re lucky a second chance turns up somehow.

On a quiet road behind the airport amongst the trees in my town lives a man that gives second chances.  Oh I’m sure Al has given a lifetime of second chances to the people whose lives he’s drifted through, that’s just the kind of guy he is, but the second act that he directs for a cornucopia of cars in his gravel driveway and garage speaks to his love of autos.

Al Sevi, mild mannered pilot, spends his off-time with the things that matter most: family, friends, and cars.  Frequently, all three of these merge and have turned out to be the reason he acquired many of his “second chance” mechanical wonders.

You see…Al is a positive person.  With his dogs Jake and Penny at his side, he is a problem solver, a go-getter.  Remember those kinds of people?  I do, and I’m so glad my path has crossed with Al’s.  His attitude of gratitude and fortitude moves him through life with purpose and sets him up for success when it comes to being a restorer of cars…and faith.

Variety is the spice of life and that holds true with the project cars Al has taken on.  His 1971 Alfa Romeo Spider sits on the blocks sporting parts from a donor car and engine.  Scouring the internet for replacement parts as well, trial and error make him a scientist of sorts.

He’s not afraid of getting his hands dirty and has high hopes for this project. Saved by he and a friend on a flatbed from a Kentucky barn, this Alfa is getting it’s second chance in one of the coveted spots in Al’s garage. 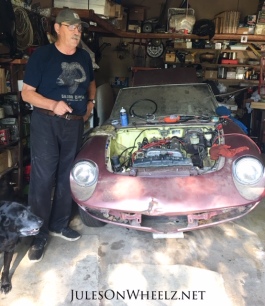 1971 Alfa Romeo Spider and Al Sevi
His Navy son will be the recipient of this next save…a 1959 Mercedes Benz 190 SL…provided his son has a garage to put it in. Starting up the first time it was asked to, the Benz has a solid motor and body with the rest in progress.  There is no mistaking the originality of the dash and seats in this wonder.  Seeing it move down the road to its new home someday will be the joy for Al. 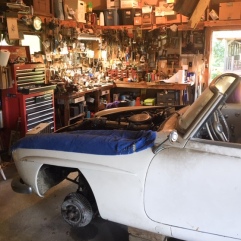 1959 Mercedes 190 SL
Already road worthy and loved, his 1992 SAAB was acquired from friends.  He loves to show the backwards install of the engine to onlookers like myself. “Changing fan belts can be quite a challenge”,  he chuckles.  I think he loves that its a convertible.

Everyone needs a truck, so the 2001 Chevy Silverado definitely has a spot in the lineup.  A well-taken-care-of 1996 Mercedes Benz S500 came from a friend as well. Not slight in frame, Al appreciates the roomy interior for long trips.  His niece’s 2006 Subaru Legacy wagon flanks the SAAB touting almost 200,000 miles and more to go.

Last but not least, a 2003 VW Beetle has found its home with Al.  Totaled in an accident from the rear, he purchased it from a friend and headed to the junkyard to find a rear replacement, after all, in a VW of that year the money’s in the front.

Oh, and throw in a 1961 Harley Davidson…just for good measure.

As you well know, car people fascinate me.  They are interesting, dedicated, kind and determined.  You’ll never be starved for a story when you’re with them and walk away glad of the time you spent in their presence.

Find a car person this week to spend some time with.

I’m here if you need me…and so is Al.