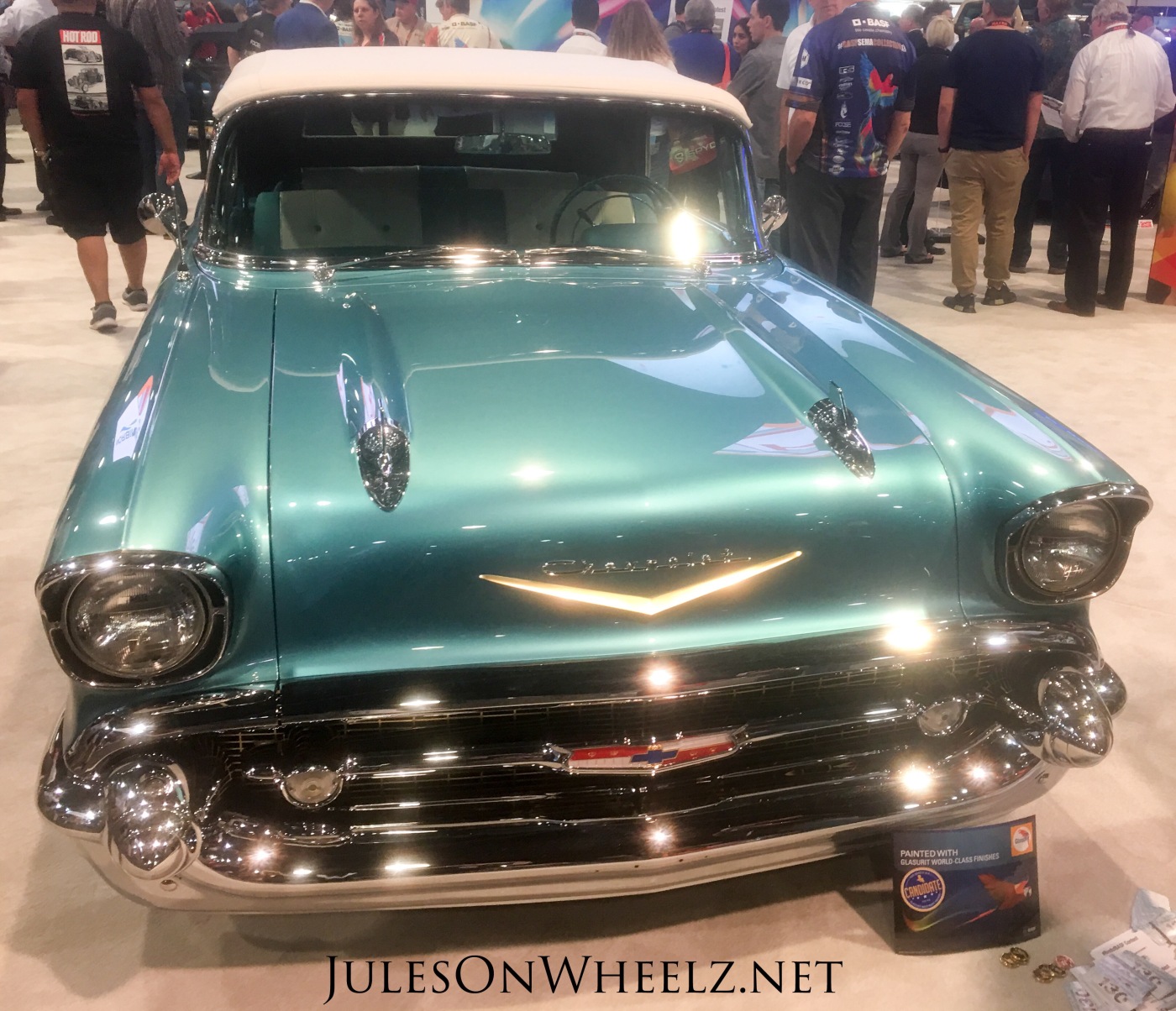 Kids and cars.  Each unique within their category. The same parents can produce polar opposites both in the car industry and life.  Every 57′ Chevy is not the same. Coming from a family of five kids I get it.  So did Sam Foose.

Sam Foose was the father of Overhaulin’s Chip Foose (aka Samuel Foose Jr.).  The four kids in the Foose family were as different as they come, especially Chip (he was the only boy) and his sister Amy, who was stricken with Hutchinson-Gilford Progeria Syndrome.

I’ve had Chip on my mind the past few days.  If you’ve read my previous post “Life Happens in Cars” then you know that I lost my brother about a month ago.  It happened during my week at SEMA.  Things had been going great on Monday and Tuesday.  Auto overload was in effect and I loved it.  All of my favorite people, places and things.  The shocking news that came Wednesday morning changed all that.

Returning to SEMA on Thursday was by pure willpower alone.  Funny how one can be alone amidst thousands of people, but I was able to pull it off.  Distraction and focus on things other than memories of times past with my brother, were hard-fought.

Friday night arrived and it was time for SEMA Ignighted.  A car show for the masses, the public could attend for a mere $20, and they did.  Beautiful weather framed a sunset amongst metal and exhaust like a Monet.  My friend and I oohed and ahhed like waves on the sea as each proud production drove by.  Saying that I saw things that I’d never seen before was an understatement…in a good way.

As we cruised around the transformed parking lot across from the Las Vegas Convention Center I noticed a “Foose Design” mobile sales trailer.  I had tried to meet Chip just the day before inside the show, but alas, nada.  He was only there for an hour at the BASF booth. 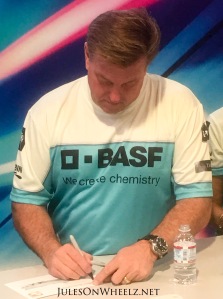 When the line was cut off to meet him inside the show, it was because, “Chip just likes to talk to everyone so we’re not able to move through a large number of fans” said one of his representatives.  Though disappointed, I could easily wrap my head around a guy like that.  Why just get a signature?  A personal meeting with one of the most famous names in customs meant way more.  Good for those fans.

Chip’s long-term relationship with BASF was in its glory with his custom paint job on the  1957 Chevy Bel Air Convertible outfitted in Tropical Turquoise Pearl.

Situated in the corner of the BASF booth, it stood out for me as one of the best displays of exactly what SEMA stands for.  Special.  He kept it classy and enhanced it with his custom Foose Design. 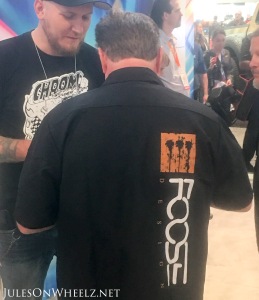 Now that I was standing next to his designs by way of t-shirts, mugs, coasters and the like, I thought why not try again.  Apparently the line behind me was not for t-shirts, it was to meet Chip.  There were only about 20 people in line so we joined the faithful.

Apparently the line had started about 3:30 pm and had fizzled out when Chip had not shown up at the appointed time, 4 pm.  It was 5:30 pm now.  Hunger and more parade called to most, so only a few of us waited for an non-guaranteed meet up, kind of like an online date.

Idle chatting about careers and car experiences flowed freely around me so I gained the courage to join in after a few failed attempts at guest appearances on Snapchat with my friend.  Reception and towers were maxed out with all the social media buffs posting like clockwork. 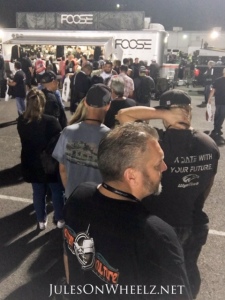 Representatives of the Foose team came out and apologized to the crowd for the delay.  The rumor was that Chip had tried to drive his custom truck from the show to the Foose retail location, but had been held up at 7-Eleven.

Well, I know that a quick stop for a Slurpee calls most of us on July 11th, but during the biggest night of SEMA?  Apparently he’d been recognized and descended upon long enough to hold up the truck and cause it to overheat.

Would he ever show up?

It was another 30 minutes or so and an update said he was on his way…oh boy!  Hope!  It wasn’t ten minutes and here comes Chip striding along side his four friends pushing his truck through the crowd toward us.  The 57′ showed up as well.

Long story even longer…45 more minutes and I was face to face with the anointed one.  I had once more been apologized to by one of his representatives at the head of the line for the same reason…”Chip likes to make a personal connection with his fans”.  As the next fan in line, I was good with that. 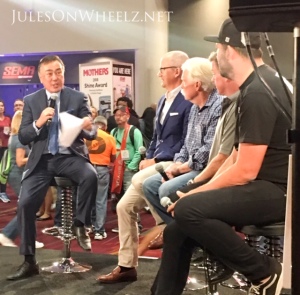 Nerves under control and the happiest face I could muster, considering the week’s circumstance, I was warmly greeted.  Formalities exchanged, he asked what I did and I told him with business cards clumsily extended.  “Are these for me?”, why yes Chip, they are.  We had a nice talk about how we both loved cars and I offered an amen on the panel topic he had discussed the day before detailing how cars are a part of our lives.   My blog here is a sure testament to that belief.

I had purchased a t-shirt so as our time came to a close and those piercing brown eyes were about to fade away, I thanked him and asked if he could sign my shirt.  It had grown chilly and I had put it on, so with my camera in the hands of his trusty assistant, I was photographed being signed by Chip Foose. 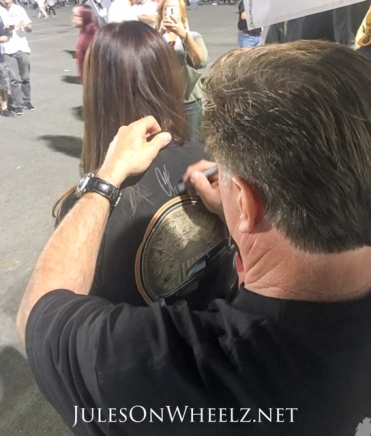 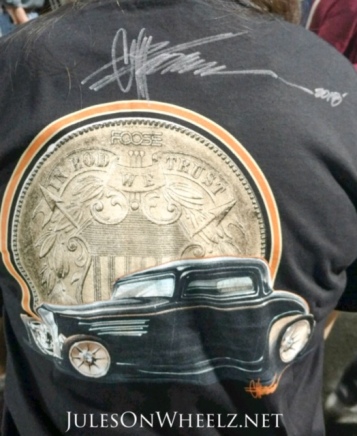 I’ll never wash that t-shirt and I’ll never forget the kindness of Chip Foose during a rough week in my life.  He brought a smile to my face when nothing much could. 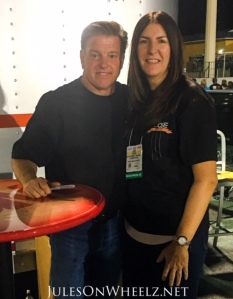 I’d like to return the favor now and give Chip my condolences over the death of his father today.  Sam Foose was, according to Chip’s own post on Facebook, “…my hero, my best friend.” Those words are echoed in an article he wrote about his Dad from 2015 via Ebay Motors.  Click here to read that tribute.

Thank you Sam Foose for raising a son who is kind, caring and passionate about cars.  Know that you are loved by your son and he does you proud every day with the care he gives to people he’s just met…like me.

*To see a tribute to Amy Foose and her family click here.

**To find out more and/or donate to the Progeria Research Foundation click here.