We’ve all wished for it.  The eternal hope that we might someday sit in a fine specimen of automotive greatness feeling the rumble under us as we motor down an infinite highway of pleasure…

Hello, Hello!  This is reality…remember me!  Rarely do mere mortals commence on a path to this dream, but one can get pretty close…it’s called The Chicago Auto Show.

Hundreds of cars descend each February, near icy Lake Michigan, upon McCormick Place to the delight of those mere mortals to put a little spice in their winter by making some of those dreams come true…almost.

Having been an attendee for years, I know exactly how you feel.  Its cold.  It’s a pain getting there. Its…its…glorious once you head up those escalators and see the globe waiting for you.  You’re almost there!

Check that winter coat, by golly, and get in there!  Never has such care been taken to display all that each manufacturer holds dear this model year.  Well, maybe, there is Detroit (a close second especially with that Bullitt move this year), L.A., New York, etc.  but being the true Midwesterner…Chicago all the way baby!

I was able to live a dream this year by attending as a member of the media.  Up close and personal just got real.  The drama, excitement and the sheer love of cars bubbles up like champagne during media days.  We all took a long drink for two days and I especially savored sipping the bubbly at BMW.

See that smile on my face…dihedral, scissor, butterfly, batwing, gull-wing or falcon, sliding, suicide, canopy, swan, etc.  Doors, doors I love them all for they are the portal.  The BMW i8’s scissor doors are very functional and give a wider entry point for taller drivers like myself.  Sliding into the seat and swinging the legs around  into the cockpit is effortless.  I believe my BMW product specialist said I was “the most graceful so far today” which I wore like a badge of honor.  Closing and opening the doors was a breeze with the smooth mechanics and use of carbon fiber by BMW. 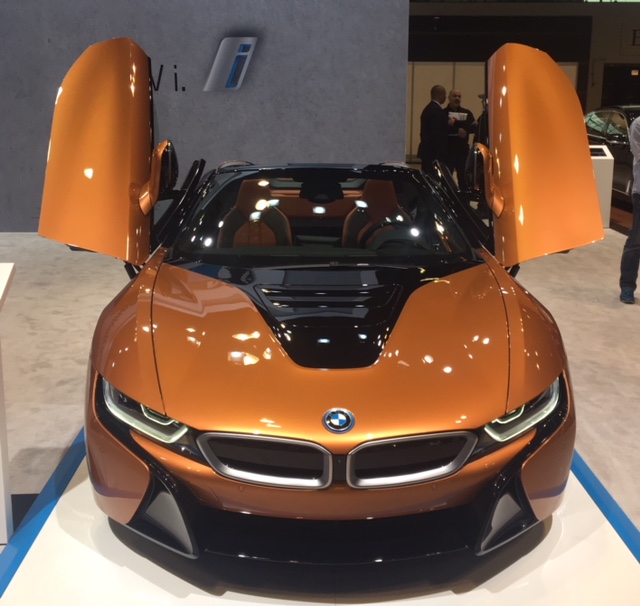 The i8 combines electric and combustion engines through BMW’s  eDrive technology for 369 horsepower and a 0-60 mph in 4.2 seconds. This roadster in E-Copper is meant to play with the big boys, nicely.  Four driving modes COMFORT, SPORT, ECO PRO, and eDRIVE, add to the allure of the i8 as a car of the future made for the present.

The i-Series drives the electric revolution for the brand.  One hundred i3s were leased by LAPD in 2016,  beating out Tesla, to conserve emissions/carbon footprints. At half the cost of Tesla per unit, the three-year contract between BMW and LAPD allows for technology improvements and lays the groundwork for use as a possible patrol car sometime in the future.  The infrastructure needed to supply charging stations for the plug-ins is growing in California thanks to the LAPD investing in charging stations for the bevy of i3s.

Lastly, as I roamed the BMW corner this Laurel Motorsport M2 art wrap edition caught my eye that was provided by Laurel BMW of Westmont, IL.  Ever popular, the M-Series’ newest member is a hit with those wanting high performance in a smaller package.

BMW conducted extensive tests of its mettle at the Las Vegas Motor Speedway and winding roads 5000 feet higher at Mount Charleston.  Living in Las Vegas for 20 years, I know these areas well and working some magic as the elevation increases incrementally towards Mount Charleston is a challenge for many autos but the rewards are worth it!

The Chicago Auto Show is definitely the place to go for winter dreamin’. It is the one show where most attendees are actually shopping for their next car.

I’ll put BMW on my “brands to consider” list from this year’s show, as a good Midwesterner would.

A little bit of February-in-Chicago dreamin’ is good for the soul.

Why should California get all the glory…